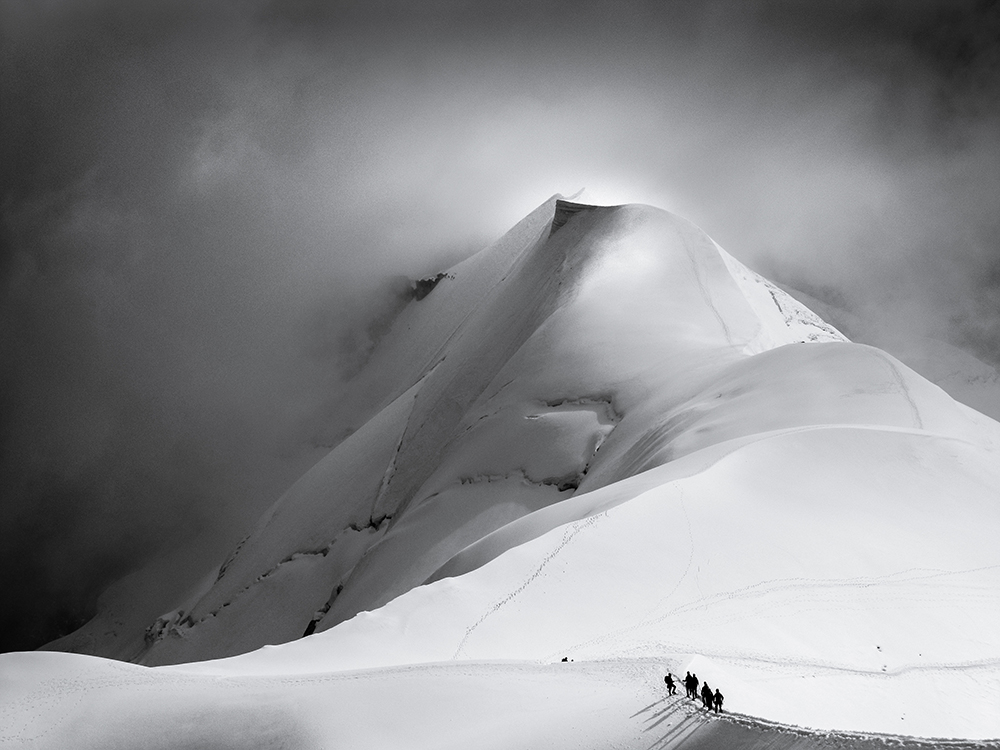 "A team of mountaineers makes their way towards the summit of Mont Blanc, the highest peak in the Alps. I took this photo from the top of Aiguille du Midi, a nearby mountain which is accessible via a cable car which rises from the valley in Chamonix in the southeast corner of France. Peaks in France, Italy, and Switzerland are visible from the summit.

The views from the top of the mountain are stunning, and I began taking photos as soon as I disembarked from the cable car. The incoming clouds provided unique photographic opportunities, and at times I was inside or even above the clouds. The team of mountaineers along the ridge stood out against the snow and allowed me to introduce some scale. The massive size of the mountain is as impactful as the relative smallness of the people. The fact that the climbers are tethered together made a powerful statement about teamwork while the fog which shrouds the summit introduces an element of intense foreboding. The interplay of light, shadow, snow, and clouds was very complex and I thought would suit the image to black and white treatment.

I've had a fascination with the Alps since I was very young. In 2011 when I was 29, I finally had the opportunity to visit the region and I spent two weeks doing a backpacking route which spanned over 120 miles through France and Switzerland. The route begins in Chamonix and this picture is especially meaningful to me because it was taken on the first day of my dream vacation. Being able to view the expanse of the mountains from a high vantage point helped build the anticipation for the journey I was about to undertake, and the effort of the mountaineers was inspiring."