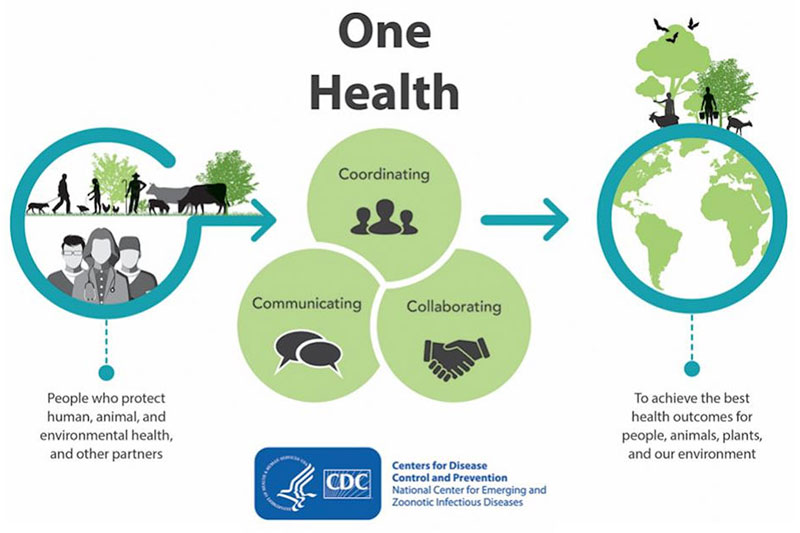 The general profession of environmental science includes numerous specializations, including environmental health science. As a profession, environmental health, also known as environmental public health, focuses on the identification, evaluation and control of hazardous agents, including infectious microorganisms and toxic chemicals, among others, that contaminate the air, water, soil and food matrices. The presence of contaminants in one or more of these matrices, which act as exposure pathways, increases the individual and collective exposure hazard potential to humans and other living organisms. Accordingly, environmental health science is a major discipline involved in the original, and more so an expanded, One Health approach. Some faculty members and I from the Division of Environmental Health Sciences in the College of Public Health are very involved with the constantly evolving Global One Health initiative (GOHi) at The Ohio State University.

The original, and presently the most common, definition of the One Health approach focuses exclusively on an integrated multi-disciplinary approach to address zoonotic infectious microbial exposure, and disease surveillance, prevention and mitigation at the interface of human health, animal health and the environment. The rationale for exclusive emphasis on zoonotic agents and diseases is because almost two-thirds of all infectious diseases adversely affecting humans originate from animals. These zoonotic infectious agents often have environmental reservoirs (e.g., soil; water) and are transmissible from animal to human and, in some cases, the reverse.

As agriculture, animal domestication, and wildlife continue to expand with corresponding increased proximity to humans it is clear that continued focus on infectious agents and communicable diseases remains critically important within the One Health approach paradigm. Indeed, this remains the major and most common focus for GOHi, however, the focus has expanded as part of GOHi’s evolution.

There has been increasing human population growth and density worldwide with corresponding needs and demand for various products and services. In relation, all forms of transportation, industrial manufacturing and energy production sectors, as well as other relevant sectors including agriculture, have exhibited concurrent growth. With this change, there also has been corresponding urbanization and densification of these sectors within large metropolitan areas worldwide. Although these observations are worldwide, including within the United States, some of the most substantive and significant increases are associated with growing and economically improving lower- and middle-income countries (LMIC) as they experience increases in transportation, industrial manufacturing, and energy production and use. Much of GOHi’s international work involving professional and technical capacity building via education and training, research and outreach includes LMIC countries in eastern Africa.

Whereas pathogenic microorganisms originate from and are associated with various meso- and macroorganisms and environmental matrices that serve as reservoirs and hosts, toxic chemicals originate from and are associated with the various sectors of transportation, industrialization and energy production. As a result, toxic inorganic and organic chemicals, in the forms of solids, liquids and gases, are both intentionally and unintentionally released into the environment. These released chemicals in turn contaminate the air, water, soil, and food matrices which, as stated earlier, act as exposure pathways. Depending on the types and levels of toxic chemicals plus the duration of direct and indirect exposure, among other exposure factors, numerous types of non-communicable diseases involving almost any organ system adversely affect humans and animals. It is also known that toxic chemicals can adversely affect plants too.

The comprehensiveness of the profession of environmental health aligns even better with the expanded paradigm for the One Health approach. Environmental health already focuses on the identification, evaluation and control of both infectious microorganisms and toxic chemicals—as well as toxic physical agents such as radiation and noise—that contaminate environmental matrices. Environmental health science identification and evaluation methods and practices go beyond characterizing the types and levels of infectious and toxic contaminants in these matrices, but also determines if there are associated exposure pathways that result in human exposure hazards and associated human disease risks.

As GOHi progresses and expands from present to future, we aspire to continually implement the broader paradigm of the One Health approach within Ohio, the United States and internationally. With this, and with continued focus on expanded implementation of our strategic plan with the expanded One Health approach paradigm, we will contribute substantially, effectively and efficiently to eliminate and reduce adverse impacts to humans, animals, plants and the environment associated with infectious microorganisms and toxic chemicals.