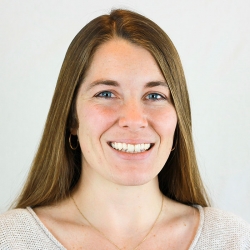 Ashley Staples, a postdoctoral scholar in the College of Education and Human Ecology, has been awarded a 2021-2022 Fulbright U.S. Scholar Award to England for “Exploring the Campus Climate for Connections Across Religious Difference.”

From September 2021 – July 2022, Staples will be researching how college students make sense of their campus climates for religious diversity through a qualitative content analysis of student data across several secular universities in the United Kingdom. Staples will be based at Durham University in Durham, England.

“This project is significant because, as our world continues to internationalize, we are increasingly in contact with those who think, believe, and orient their lives in different ways. Even two cultures that are similar on paper, such as the U.S. and the U.K., have micro and macro differences in how they orient around religion that matter when trying to understand the perspectives of the other,” Staples explained. “Understanding how these differences manifest in similar and dissimilar ways using the microcosm of higher education could show the most diplomatic ways to navigate religious diversity between citizens and in business, non-profit, or government relationships both internally or across national borders.”

“As organized, this project will support my collaboration with the Interfaith Diversity Experiences and Attitudes Longitudinal Survey (IDEALS) and offer access to qualitative data for use in my study. Both efforts will significantly extend what we know about college students’ experiences with religious diversity students on U.K. campuses and foster an exchange of practical and scholarly knowledge between both countries. Understanding how college students of all belief systems make sense of their encounters with religiously diverse peers is important to provide an appropriately supportive learning environment,” noted Staples.

The Fulbright Scholar Program is administered by the Council for International Exchange of Scholars and is sponsored by the Bureau of Educational and Cultural Affairs of the U.S. Department of State.