Revisualizing the One Health Schematic

The One Health approach is often represented as a classic Venn diagram – three (or more) circles overlapping in the center, displaying logical relationships between items. Circles that overlap have a commonality, whereas circles that do not overlap do not share those traits. Additionally, a Venn diagram implies that all possible relations between a collection of items are represented. Based on this description, one could argue that the current One Health schematic depicts humans, animals and plants separate from rather than a component of their environments. They may share common traits but ultimately function independently, intersecting at specific (and perhaps predictable) points. Further, it is only at the convergence where a One Health approach can be truly applied (Figure 1). 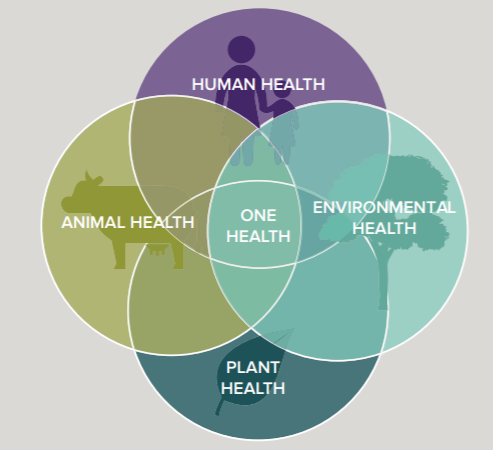 Historically, One Health has been readily understood and championed by animal health disciplines, in part because of its origins relating to the management of shared disease threats to humans and animals, including zoonotic and vector-borne infections. With the current One Health schematic, it is easy to understand that certain disease threats are common to humans and animals while others are species-specific. How we visualize, and thus explain, the One Health approach is critical to its implementation, and its implementation has proved particularly challenging in some disciplines and sectors.

Since first coining the term “One Health” nearly two decades ago, there has been a growing interest and a rising number of publications relating to One Health topics and themes. However, disciplinary shortcomings still exist, particularly with respect to the environmental sector and the medical/veterinary-ecological interface (Humboldt-Dachroeden et al., 2020; Manlove et al., 2016). Perhaps not by coincidence, surveys of U.S. clinicians have found low rates of environmental health knowledge and training (Machalaba et al., 2021). Conceivably the visualization of the concept needs to be reconsidered, prioritizing integration and systems thinking, rather than segregation. Merely shifting the visualization could lead to downstream effects on how the One Health approach is taught and operationalized.

In elementary school science, students are introduced to systems thinking through concepts such as the food web – a graphical representation of interconnections between living organisms in a community that emphasizes relationships between each contributor. It is through the food web that concepts like interconnection, relatedness, interdependence, and hierarchy are explained and understood. Furthermore, this representation innately expresses the dynamic and adaptive nature of living organisms to maintain balance and optimal health.

As humans, we are not separate or distinct from our environment; while the composition of that environment and the interactions within it may vary, there is an innate reliance, regardless of what that environment looks like (i.e., natural and built components). Reimagining the One Health schematic to emphasize that humans are a part of (both as a contributor and extractor) an ecosystem and that our activities influence that ecosystem, affecting animal and plant populations, may better achieve its purpose.

First, an even broader view of One Health may be taken to encompass not just the immediate environment but the greater biosphere that connects and supports all life. “Communities” should consider not only human inhabitants but all living organisms. Humans and animals are not just interdependent with their environment, but indivisible. A more representative schematic of One Health would reinforce the transdisciplinary and integrative nature of the approach by allowing for an enhanced visualization of the domains contributing to health challenges. This schematic builds on the hierarchical levels of ecological organization, where the biosphere encompasses all life on earth, biomes represent climatically and geographically similar areas within the biosphere, and ecosystems are further specialized communities composed of living and non-living components. Ecosystems may include both built and natural components in variable proportions; thus, the schematic would be dynamic to best represent the ecosystem under study. Within the ecosystem are human and animal (domestic and wild) populations with varying degrees of interaction. This renewed schematic would emphasize the dynamic nature of human-animal interactions that are likely influenced by the ecosystem they share. This reconceptualization of the One Health approach may facilitate its application by a greater breadth of disciplines and stakeholders (Figure 2).

When visualizing One Health through this lens, one can see it is impossible to consider human health without consideration of the health of the ecosystem in which they are a part. How (and how much) they interact with the natural world will also affect risks and mitigation strategies.

This schematic can be extrapolated to complex, “wicked” problems like emerging infectious diseases and pandemic prevention. As ecosystems are modified (e.g., agricultural development, mining, logging), the balance between built and natural environments is shifted impacting human-animal interactions and pathogen transmission risk. Geographically similar or connected regions would be similarly affected, necessitating communication, collaboration, and data sharing to respond efficiently and mitigate such risks.

Animal and environmental health cannot be neglected in such global health priorities. One Health offers opportunities for synergistic expertise to address complex, emerging health threats. Connections between humans, animals, plants, and their shared environments necessitate collaboration to reduce risks and consequences on health and wellbeing. A revisualized One Health schematic is a critical, yet necessary step in a post-COVID world.