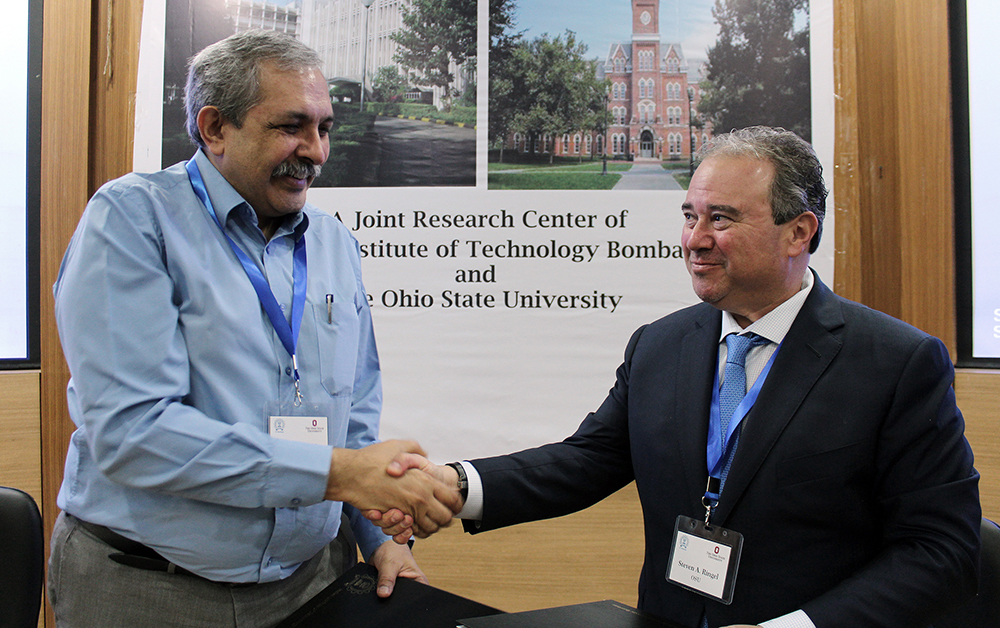 The Ohio State University on April 10 launched an initiative with the Indian Institute of Technology Bombay (IIT Bombay) to create what is believed to be the university’s first academic research center shared outside the U.S.

The IIT Bombay-Ohio State Frontier Science and Engineering Research Center will be a center for collaborative research shared by Ohio State and IIT Bombay, a world-leading science- and technology-focused public institution in Mumbai.

Through this new center of excellence, professional researchers from across the globe will connect and foster future project collaborations, while students from both institutions conduct collaborative research through a student exchange and scholarship program.

Both institutions have designated spaces on their respective campuses for researchers to work together. At Ohio State, researchers will be based on west campus, in space operated by the Institute for Materials Research (IMR). At IIT Bombay, researchers’ collaboration space will be based at the institute's Nanotechnology Research Center.

“The Frontier Center will make a real impact on society by bringing together leading researchers who are focused on some of the world’s most critical challenges in science and technology,” said Professor Steven Ringel, associate vice president for research and executive director of IMR. “By joining in this shared vision with IIT-Bombay, Ohio State has embarked on an innovative pathway to provide its students and faculty with unusual opportunities to globalize Ohio State’s impact.”

The Frontier Science and Engineering Research Center is the culmination of a history of collaborative efforts pursued by IMR and IIT Bombay.

The Office of International Affairs India Gateway collaborated with IMR to ensure a strong connection could form between the university's materials research community and Indian companies and universities through a series of meetings, during a week-long visit to Chennai, Bangalore and Mumbai in February 2014.  The success of these initial meetings led to a delegation from leading Indian companies in the materials and energy sectors to visit Ohio State’s Columbus campus later that year.

In January 2015, President Michael V. Drake and a delegation from Ohio State traveled to Mumbai to form a partnership with IIT Bombay focused on advanced materials and manufacturing, solar energy, semiconductor devices and bioengineering.

“It is a substantial commitment. I’m sure both students and faculty of both institutions will benefit greatly,” IIT Bombay director and professor Devang Khakhar said at the signing ceremony at the IIT Bombay Victor Menezes Conference Centre in Mumbai. “We have discovered there are a large number of connections, with faculty, here, having had some part of their education at The Ohio State University or through other types of collaborations that have been going on for many years.”

“This is a great opportunity for two institutions with excellent history of research and innovation to combine their intellectual horsepower and resources to create something that is greater than the sum of parts,” said Krishna, George R. Smith Chair in Engineering and professor in the Department of Electrical and Computer Engineering. “For me personally, this is a great way to bring my birth country and adopted country in a partnership that could transform the lives of students and enrich their learning experience through cross-cultural interactions.”

“I can see that there is enthusiasm on both sides. I am very positive about the future of this partnership,” Khakhar said.