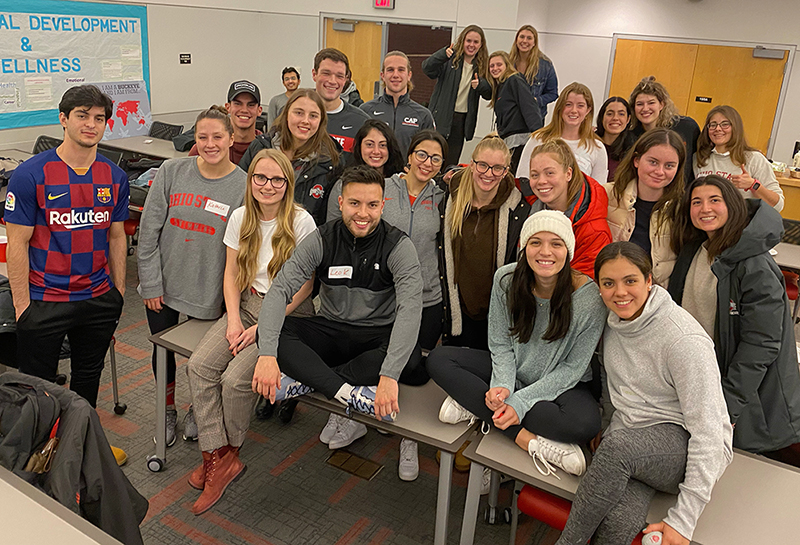 More than 1,000 Ohio State student-athletes compete on 36 NCAA D1 teams. Nearly 90 of those Buckeyes are international students-athletes who are competing at the highest level in their sport while attending school in another country and often taking classes in a second language. A dedicated group of athletes have formed a support group for all international student-athletes on campus.

“Creating the Global Buckeyes group seemed like a no brainer to me. 8% of the Student-Athlete population at Ohio State is international student athletes. It is easy to feel alone when your background is so different from most students and that can directly impact our overall experience and even athletic performance,” explains Bia Franklin, a senior from Rio de Janeiro, Brazil who was an outside hitter for Women’s Volleyball for four years.

“Global Buckeyes allows us to celebrate diversity within Ohio State Athletics and have a family feel. We hope to create a place where international student-athletes can develop a home away from home feeling and bond over their diverse backgrounds,” says Franklin.

Athletes from fencing, men’s soccer, women’s volleyball, women’s rowing, swimming and field hockey are involved with establishing the Global Buckeyes. These international students are from all over the globe including: Australia, Brazil, Canada, Croatia, Germany, Italy, Mexico and Spain.

40 student-athletes have indicated interest in the group. They plan on having meetings every couple of weeks during the semester and will focus on educational and social activities while learning about each other’s cultures.

Although Franklin graduates in May, she’s enthusiastic about the future of Global Buckeyes. “It has been such a rewarding experience already. We can’t wait to keep growing our group and reach even more Buckeye athletes.”