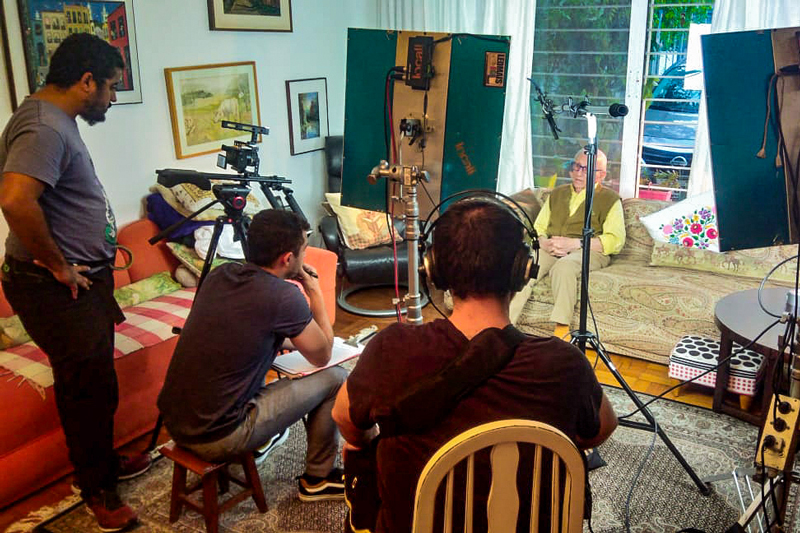 Vitor Vilaverde, a graduate student at The Ohio State University in the Department of Spanish and Portuguese, was in Santos and São Paulo, Brazil in July to film his documentary focused on Andor Stern, the only living Brazilian who survived the Holocaust.

“His story is so amazing and eventful that it has become a book, and now it’ll be a documentary that I’m directing,” said Vilaverde.

Vilaverde has an extensive experience in film. He holds a master's degree in literature from the Federal University of São Carlos and a bachelor's degree in image and sound from the Federal University of São Carlos. He also studied Latin American film at Arizona State University and wrote for television series and documentaries in Brazil. Currently at Ohio State, he studies recent Brazilian documentaries to investigate memory, pain and social justice and was invited by Brazilian film company, Querô Filmes, to direct a film about Andor Stern to share his story.

To tell the story, Vilaverde also filmed in Budapest, Hungary and Auschwitz-Birkenau, Poland. The trip was partially funded by a grant award from the Ohio State Public Humanities Collaborative and the Arts and Humanities Discovery Theme program.

“As a Graduate student investigating films, I've always missed the practical part of it. We pass so much time reading and watching about it than making it,” he said. “This opportunity to combine my research with the making of a documentary was extremely positive. The film will serve as a concrete experience of what I have been analyzing in papers and presentations throughout my academic career.”

The project is now in its editing phase and is intended to be released this December or January 2021.

“I hope the audience can relate and get emotional with this film, in the same way that this experience was intense and special to me,” said Vilaverde.