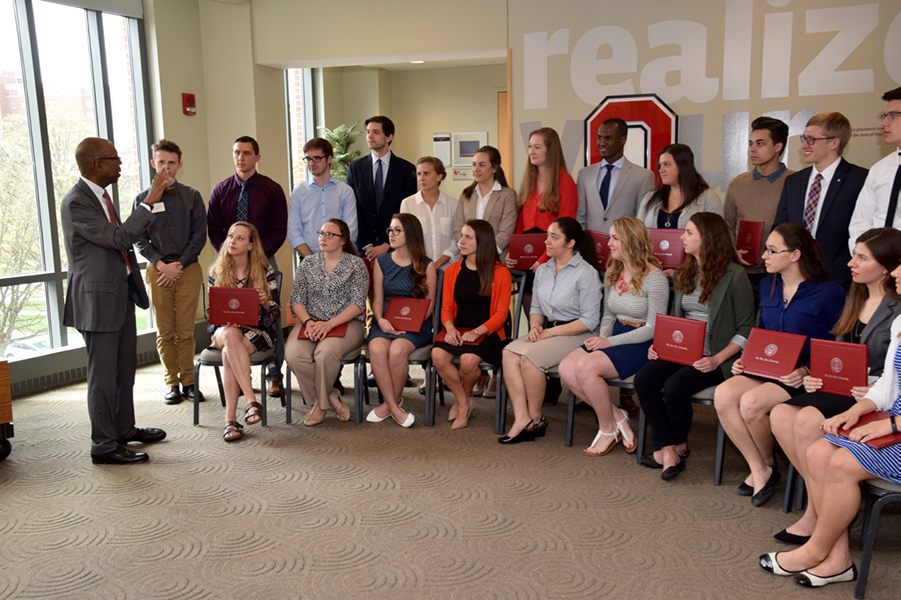 The Office of International Affairs recently recognized the 2016-2017 recipients of the Wolfe Study Abroad Scholarship at the annual Wolfe Luncheon on April 17 at the Ohio Union. President Michael V. Drake, MD, other university leaders, the Wolfe family and representatives of The Dispatch Printing Company and the Wolfe Foundation, congratulated the 30 recipients. Students were awarded a $2,500 scholarship to help fund their individual long-term study abroad programs.

The Wolfe Study Abroad Scholarship Endowed Fund was established September 1, 1999 with a $1 million gift from the Robert F. Wolfe and Edgar T. Wolfe Foundation. Over the last 16 years, scholarships in the amount of $2,000 each have been distributed annually to more than 390 undergraduate students. The Wolfe Scholarship, which is administered by the Office of International Affairs, is the cornerstone of Ohio State's study abroad programs and helps to enhance the educational experience of Ohio State students.

In 2009, Wolfe presented another $1 million gift to the university, which doubled the endowment that supports the Wolfe Study Abroad Scholarships. As a result, this year, the award amount increased to $2,500. The financial support of these scholarships has changed the lives of a growing number of students who have had the opportunity to participate in long-term study abroad programs.

To receive the scholarship, students must:

For the 2017-18 academic year, Wolfe Study Abroad Scholarships were awarded to: