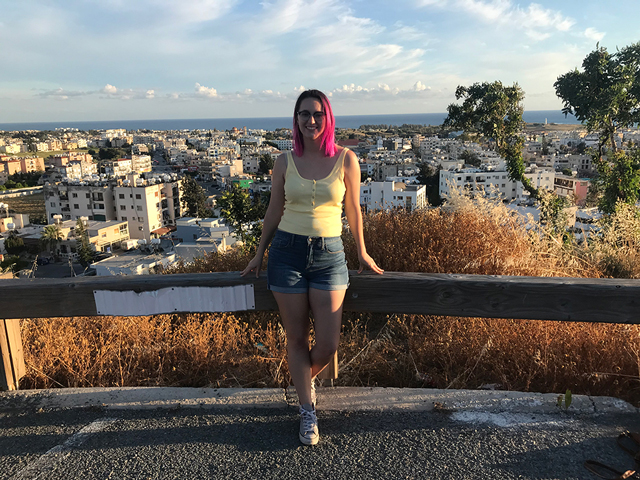 Rachel Brunot, a junior double majoring in international studies and geography, studied abroad on the Geography of the European Union education program during May 2019.

While I was browsing through the different education abroad programs last year, I was looking for programs relating to international development because that is my focus in both academics and my future career. I came across the Geography of the European Union program and noticed that it counted towards my geography major, so I thought, “Why not apply?” I also remembered meeting Stavros, the professor for the course, at the Education Abroad Expo during my freshman year, and his friendliness had left an impression on me, so I decided to apply.

I’m so glad I made that decision because I had a great time on the program. This was my first international experience where I was actually enrolled in a class while on the trip, so I had to attend class every day and complete homework, but as with any study abroad trip, most of my learning occurred outside the classroom on various day trips and just through the experience of living abroad. One of our most notable outings included a visit with the foreign minister’s office, where we got to hear about some of Cyprus’ foreign policy goals, especially as Cyprus is a relatively new member of the European Union and faces foreign occupation by Turkey in the northern part of the country. I personally found this experience very interesting, since I am interested in foreign relations and could potentially end up in a similar career. As one of the less developed countries among some major economic powerhouses in the European Union, it was interesting to hear how Cyprus plans to leverage its strategic location and other tools to get EU help on some of their own issues. I also enjoyed all the ancient Greek ruins in Cyprus which took me back to my days as a high school classics nerd. The coolest ruins we saw were these very well-preserved mosaics that depict various Greek myths on what had once been the floor of someone’s home. There are also multiple important mythological sites in Cyprus, including Aphrodite’s rock, where she is said to have been born, and Aphrodite’s baths, where she brought her many lovers including Adonis.

Though learning about the European Union doesn’t directly relate to my focus in development studies, I really enjoyed the opportunity to study a region of the world I haven’t learned much about. Additionally, though I know that geography impacts my life all the time every day, it was really interesting to be in a place with such a long cultural history and complicated geopolitical relationship with the rest of the world. I also grew personally during this trip as I became more comfortable traveling by myself and adapting to daily life in a new environment. Besides all the learning and personal development, I also got to immerse myself in a good amount of relaxation on the beach.

The most transformational moment I experienced while in Cyprus occurred during a weekend trip to Nicosia, the capital of Cyprus which is located in the middle of the island. While there, we had the chance to walk along the border of the U.N. green line that divides the southern part of Cyprus from the Turkish occupied area in the north. The only other border I have seen in person is the line between the U.S. and Canada at Niagara Falls. Needless to say, this border is completely different. Seeing the barbed wire and walls in Lefkosia that provide a physical separation between the two areas was one thing, but what really affected me was the many ways in which the people of Cyprus engage with and protest the border and the separation.

First, simply walking along the border one can sense the dissatisfaction from the abundant street art and graffiti. I could only read what was written in English, but I saw the words “No borders, no nations” and “Your wall cannot divide us” plastered on buildings next to the green line. Then, there was the Pentadaktylos exhibit at the Levendios gallery. This was a place for artists to express their sadness and mourn the loss of a culturally and geographically significant mountain range. Finally, I got to understand the division from the perspective of a Cypriot citizen. I still remember the way our guide at the Byzantine Museum described it as we looked out at the Turkish flag inscribed on the Pentadaktylos mountains - “heartbreaking” was the word he used.

I chose my geography major because of the way that people form relationships and attachments to places. Just walking down the street you lived on as a child or revisiting a place you haven’t been to in a long time can bring on a wave of feelings and nostalgia. But nowhere has this been clearer to me than here in Lefkosia, seeing how the people of Cyprus react to the occupation of lands that have important cultural and historical significance to them. The game of creating borders has always seemed too political for me - it seemed like simply a quest for power and territory between states that didn’t necessarily affect daily life. But being in Lefkosia, I saw firsthand how debates and controversies over borders are very significant in the everyday lives of individuals.

I knew coming in to college that I wanted to study abroad at least once, if not more times. So far, I have gone abroad twice, once for an internship/volunteering experience in Peru and then again for this program in Cyprus. I also hope to spend the entire spring semester 2020 abroad in Ecuador. I would definitely encourage other students to study abroad. I have always loved to travel, but even for people who haven’t traveled before or are nervous about it, studying abroad is the best way to get out of your comfort zone and change up your routine from the repetition of life on campus. I like to joke that I can’t stay in Ohio for more than one semester at a time - that’s a bit of an exaggeration, and I obviously love Columbus and Ohio State, but it’s easy to get bored with the routine of going to class and going to the library and going home. With many study abroad programs, you still have to go to class but what you do outside of class is completely unique and can teach you so much more than what you can learn by falling asleep during class here at home.