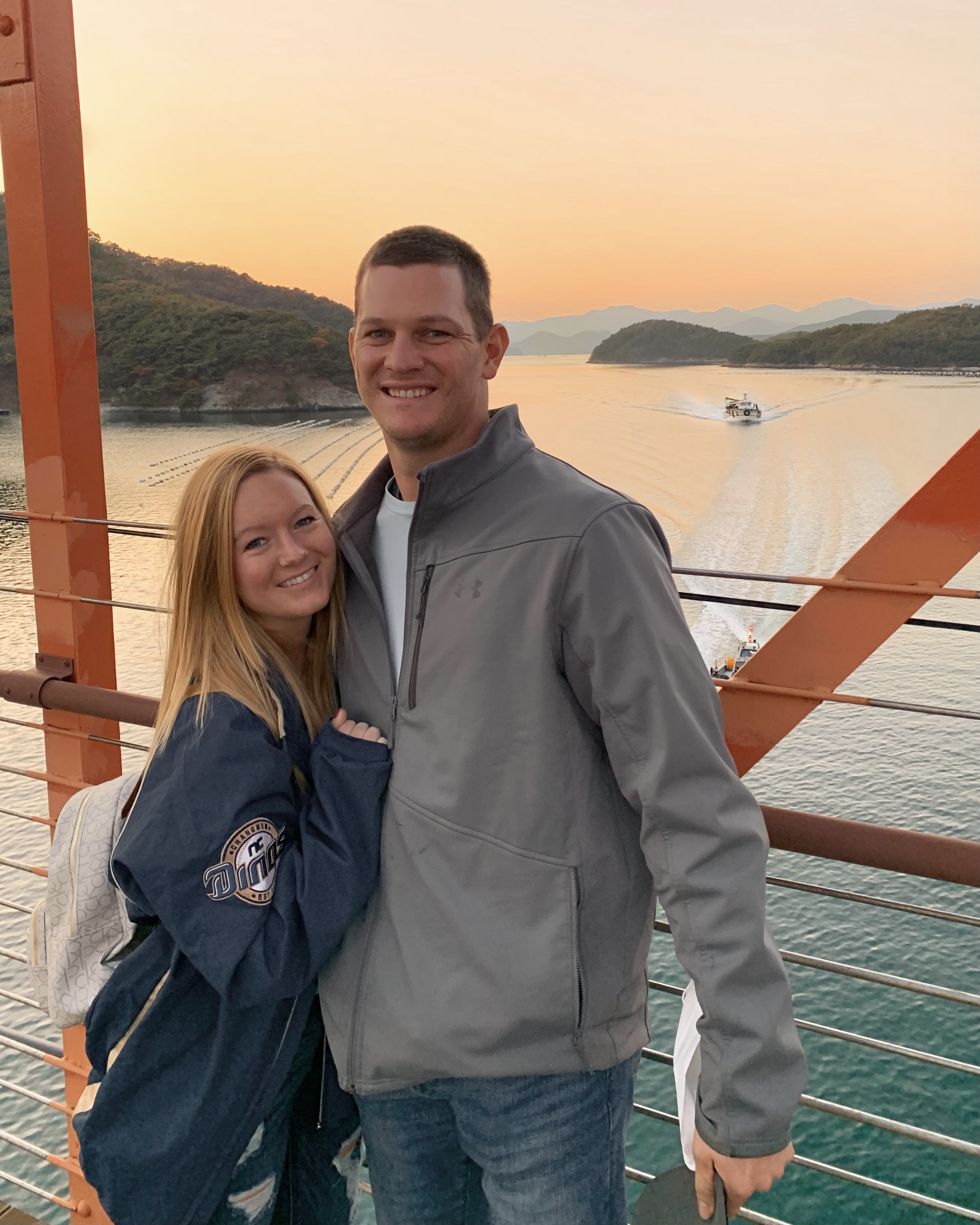 Drew Rucinski and his wife Sheridan Hug met at Lincoln Tower in 2009 and now live in South Korea as Rucinski plays for the NC Dinos.

Choosing to play a third season for the NC Dinos, a South Korean Baseball Organization (KBO) team based in Changwon, Buckeyes Drew Rucinski and his wife Sheridan Hug are a long way from Columbus.

After graduating from Ohio State in 2011, Rucinski began his professional baseball career in the minor leagues playing for a few different teams. In 2014 he made it to the big leagues and pitched for the Los Angeles Angels briefly over two seasons. Rucinski appeared in major league games for four total seasons, including with the Minnesota Twins in 2017 and the Miami Marlins in 2018, before signing with the Dinos in 2019. Hug, a 2011 graduate in strategic communication and former chairman of the National Society of Collegiate Scholars, worked at Nationwide Insurance’s headquarters prior to their move to South Korea.

“We wouldn’t be where we are today without our experiences and journey through The Ohio State University. We have felt well-prepared because of our time at Ohio State,” they said. “It led us to find the success that we have, and it is where we found each other.”

It was after completing a successful 2018 season with the Marlins that Rucinski was approached with an offer to pitch for the NC Dinos the following year. Learning about the possibility of playing abroad from former teammates, Rucinski realized that he wanted to pursue playing baseball in Korea.

Despite having recently bought their first house together and Hug’s career with Nationwide, the couple decided to move to Korea, not knowing what to expect and leaving everything behind.

“It was exciting to be able to go see a different part of the world and still play the game that he loves, although the decision to leave the United States for a full year was a big one,” the couple explained. “There have, of course, been challenging times living abroad, but we have gotten through them together and overall had a positive experience.”

While good friends and neighbors look after their home in the U.S., the demanding baseball schedule means the couple travels around Korea every two to six days.

Typically, he spends about 10 hours a day training and playing baseball with the Dinos when they are at “home.” While Rucinski is at the stadium, Hug spends her time exploring the city, hiking and trying new foods.

“Living in another country has definitely expanded our view of the world,” they said.

In 2020, Rucinski pitched in the KBO Championship winning both Game 1 and Game 6, in addition to saving Game 4 and the Dinos won the championship, the team’s first ever championship title.

Rucinski and Hug met at Ohio State in 2009 in Lincoln Tower, and the couple found success in their time on campus.

Sheridan’s fondest memories include her time volunteering and fundraising for the Columbus community with the National Society of Collegiate Scholars. She also spent a semester interning for the Disney College Program, to which she attributes much of her professional development.

The Ohio State baseball program instilled a strong work ethic in Rucinski on the field and in the classroom, preparing him for his future in professional baseball. His fondest memory is from 2009, when the Buckeyes won the Big Ten Championship and competed in the NCAA Regional Championships.

“The family culture at Ohio State has provided us with support over the years and helped us to establish our own family roots in Ohio,” they said.

Even now, Ohio State baseball Head Coach Greg Beals allows Rucinski to continue to train every off-season at the team facilities when the couple is in Ohio.

"One of the toughest things about living overseas is how much we miss our home and our Columbus community,” they said. “We look forward to returning home again for the off-season this fall.”